You are here: Home / Pilgrimage / “this is it”. . . 3 pictures of contentment from my life

This is the third post in a series on contentment I am doing.  If you would like to see the first two, please read Glory in the Grind . . . and Contentment. . . my on-going struggle. 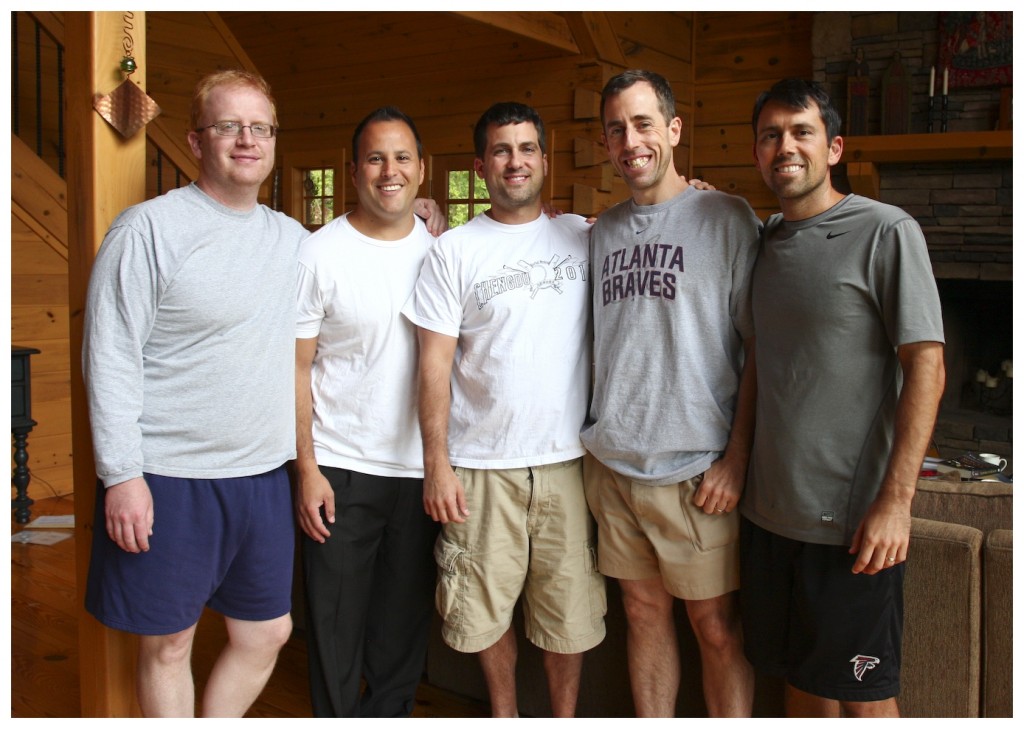 Jeremy Noonan, Julian Krevere, John Gunter, Phil Autry, and Troy Coons this summer (we are as close as ever). . .

A little while ago, a good friend of mine asked me, “when have you ever felt ‘this is it’”?  This was just another way of asking, when in life have you been completely content.  The more I thought about this question, three images or pictures kept coming to mind.  All three pictures are representative of larger themes of contentment in my life.

The first picture. . . an image of me playing centerfield in summer baseball comes to mind.  I remember so clearly standing out in the worn out patch of grass in centerfield, breathing in the air, enjoying the camaraderie of my teammates, no school to worry about, just the joy of baseball and friends.  There was zero pressure of failure, as summer ball was largely just for fun and practice.  There were almost no fans.  I don’t even remember my parents being there, which was highly unusual.  Just teammates, coaches, the sun, competition (hard fought, yet winning and losing was not utmost in our minds), and joy.

I wasn’t worried about the future.  I wasn’t weighed down past mistakes.  I just played, laughed, enjoyed, worked, sweat, bled, and loved every minute of it.  When I would leave the field, things would get more confusing.  Teammates sometimes became conduits of sin.  Coaches became avenues of stress.  Even talents became expectations, which would funnel into the fears of unrealized dreams and failure.  However, I do have that memory of standing in center-field there at Tucker Park, joyful and content in the moment.

The second picture. . . a scene comes to mind of the thrill of learning about Christ and the Bible as a sophomore in college.  I had just been a follower of Christ for a few months.  It was as if the scales of death had been removed from my now liberated soul.  I would meet with three others for Bible study and feel as if I had been lifted to heaven there in the architecture building or in the basement of my fraternity house.

We had no idea what we were doing.  We only knew that “I was lost and now I am saved.  I was enslaved, but now am free.”  There were lots of ups and downs during those months.  Sin was still private, though my faith was becoming more and more public.  However, I often had feelings of “this is it” during those months; those tumultuous first few months of my new life in Christ Jesus.  We were messes.  We were reckless, but we were also men in love for the first time.  A love that was way bigger than we had ever thought possible.  If only life could remain that clear all the time!

I think of heartfelt conversations, connections if you will, with dear friends.  Brothers and sisters in Christ; partners in the Gospel; fellow sojourners in life.  Conversations where laughter is present, but so is purpose.  Where issues of the heart are discussed, mulled over, stretched out, and put on for size.  I am blessed beyond measure for having had countless times like these over the years.  They can come with an elderly saint or nephew or niece.

When I think of “this is it” type times in life, times of true contentment, these come to mind.  Many times it has happened when grieving sin, either in those around me or in my own life.  Many times in the process of celebrating victory and growth.  Most of the times, though, are just in sharing normal life with Christian brothers and sisters, both in the good times and in difficulties.

I lost a great one when my college friend, Phil Clarke, graduated to heaven.  I look forward to future laughter and connection with him when I get where he is now.  I really do.  I can clearly remember my first cogent thought following the devastating news of Phil’s passing.  I sat on my bed, three friends surrounding me.  We were sitting about five yards from the bed where Phil had spent the previous night, his last night on earth.  The only thing thought flooded my mind was, “I can’t believe he beat me.  I can’t believe he is home.  He finally has all the questions answered that we have labored over together.  He has finished his race well.”

The third picture. . .  strangely enough, took place a few hours after Phil’s death.   It was perhaps my best “this is it” moment I have ever experienced.  My little off campus house had been packed with mourners all night.  Around 2am, most of the others had retreated to their homes.  Phil Autry, Troy Coons, and I were still around.  We all knew that sleep was going to be an impossibility that night.  We decided to walk about a mile to another house where several of the others from the Greek ministry (we had started a ministry to the Georgia Tech Greek system two years earlier) were living at the time.  We knew they wouldn’t be sleeping either.

As the three of us walked in the still of that Atlanta evening, everything seemed to be in slow motion.  The glow of the street lights was cascading down upon us.  My heart felt as if it had been carved out from my chest and placed on the front of my shirt.  Phil, Troy, and I walked, largely in silence, hearts broken, yet grateful beyond words to be with each other.

I remember it hit me that those two guys would have gone anywhere with me, done anything for me, including giving up their lives.  I would have done the same for them.  We had given our lives, along with Phil Clarke, for those in the Greek ministry at Georgia Tech those past few years.  We had struggled with growth together.  I trusted them with my very life and they the same with me.  We all knew it.

Though my heart was broken with the devastation of losing Phil, that was probably the biggest “this is it” moment in my life.  Life seemed crystal clear.  The air was filled with purpose, passion, mutual commitment, and the love of Christ Jesus that was palatable in a way that I had never seen or experienced prior to that moment.

I have been fortunate to experience a few highs in winning big games and accomplishing goals academically and otherwise.  I have loved my work and have often felt incredible joy in what I do.  I could list 839 different times of traveling around Asia and the world where I was filled with fascination, even exaltation.

However, these three events stick out as “this is it” moments of true contentment of which I have been fortunate enough to experience.  The first (baseball) seems to represent to me the faith of a child and the simplistic, yet real joy that comes from just living the way God has created me to live.  I love it that the Bible uses children (Mark 10:15) as a tangible example of how we as adults are to live.

The second (the first few months of my faith) represents the “joy of my salvation”.  When I see faith for the joy that it IS, and not just for what it WAS, I live in contentment and peace.

The third (time with Troy and Autry following Phil Clarke’s death) is indicative of the wonderful pleasure I have in experiencing life within the context of community, specifically within the backdrop of the body of Christ.  These are mutually committed relationships which both inspire me on towards excellence, but also bring color, laughter, and genuine joy to life.

There are other times of true contentment that I have experienced.  These three “this is it” scenarios, though, are ones that have been particularly formative for me in my pursuits of the Christian pilgrimage, life, purpose, and contentment.

(again. . .This is the third post in a series of contentment I have done.  If you would like to see the first two, please read Glory in the Grind . . . and Contentment. . . my on-going struggle.)