You are here: Home / Life / Pizza in this corner of East Asia! 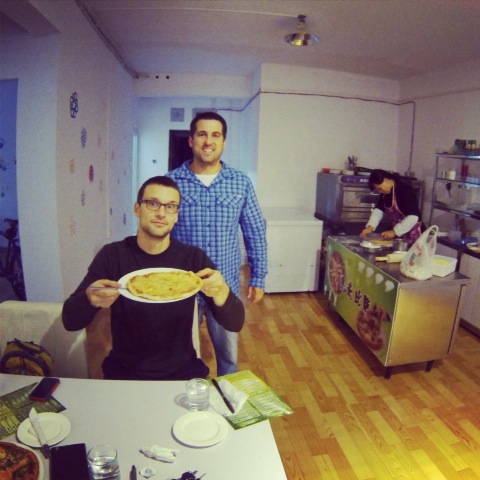 We FINALLY have pizza in this little corner of East Asia!

As I type this post, I am sitting in a coffee house about 1/2 mile from my apartment. I tell you this seemingly mundane detail, as this is not in fact a mundane detail. You see, it has not always been this way for my life here in Asia.

When I arrived in August 1999 to live here “long-term”, there was almost no “western food” in this area of Asia. There were tea houses, hotpot restaurants, and dinning establishments which featured the meats of the day in cages on the sidewalks out front.

You knew the restaurant had chicken, because you saw chickens in a cage next to the front door as you walked in.  You ordered chicken, and the waitress would then extract your soon to be dinner from said cage, carry the little critter through the restaurant, enter the kitchen, and 15 minutes later you were dinning on the little fellow.

Nothing like looking your dinner in the eyes just prior to ingestion!

This is NOT the normal dinner experience now.  While still not the cleanest restaurants in the world, the situations have greatly improved.

Also when I arrived, there was pretty much no American food.  Now this is not the case for most of the big cities, as Starbucks and McDonald’s are as ubiquitous in our metro centers as New York or LA.

However, I currently live in a university district fairly far from our city center.  We did get our first McDonald’s last December, but there are only so many times you can hammer a Big Mac without having a coronary explosion.

So, when word got around that a local university teacher had opened a pizza joint, Michael Gregory and I were quick to jump on it!

The place is actually on the first floor of an apartment complex well off of a major road.  We had tried unsuccessfully to find it last week, but finally made our way there yesterday.

Though not the best pizza I have had (not even in the top 100!), we are still thrilled to have a little “taste of home” so close to where we live.